-     No new Rel-18 work was allowed in RAN, except normative follow-up work on earlier studies:

-     No upscoping of existing Rel-18 work was allowed in RAN

No change was made to the original RAN Rel-18 timeline, except alignment of the ASN.1 freeze date with CT.

The first figure is edited from RP-222730 to show the change. The second figure comes from the joint session with SA and CT. For Rel-19, the first figure shows tentative planning in RAN: Workshop in May/June, RAN1/2/3 package approval in December. 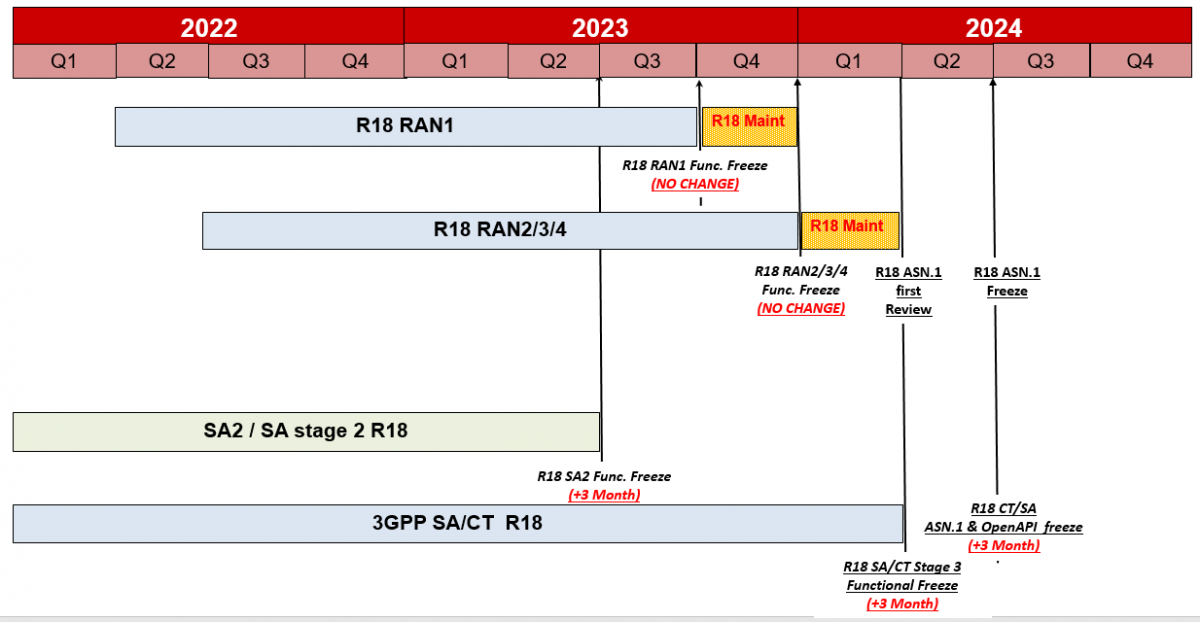 A solution was proposed to handle terminals in the field that are not compliant to 3GPP specifications. It was confirmed that by "non-compliant UE" those UEs are meant that that do not implement mandatory functions. Many companies see this not as a RAN aspect but rather related to the NAS layer. No consensus could be reached.

3GPP discussed submission towards IMT-2020 Satellite. Most companies agreed that the evaluation and submission shall cover Rel-17 NR-NTN and Rel-17 NTN-IoT but no consensus could be reached.

-     SI: Study on Study on expanded and improved NR positioning

A TR skeleton was agreed. SA1 use cases will be handled in two groupings with the following starting points: Grouping A (Indoor, Outdoor, Indoor/outdoor) and Grouping B (Inventory, Sensors, Positioning, Command). Discussion of CN-related aspects will be under the third objective of the SID. 'Environment of device' can be 'indoor', 'outdoor', 'indoor or outdoor'. 'Basestation characteristic' can be: macro-cell based deployment, micro-cell based deployment, pico-cell base deployment, or none. The study considers Ambient IoT deployment in-band to NR, in guard-band of NR, and standalone band from NR, and FFS: relationship to deployment scenarios. Spectrum in a deployment scenario is: licensed FDD, licensed TDD, unlicensed. FFS: whether the TR will describe different types of device-terminated traffic, e.g. Device-Terminated command and Device-Terminated reporting trigger, and whether to describe relationships between device-originated and device-terminated traffic.

The representative sub use cases were confirmed according to RAN1.

The FR2 topic is continued as a "study" only objective with both RAN1 and RAN2 involvement. The CA objective will be revisited in March, including the possibility of including it in Rel-18 with minimal WG efforts, or dropping it from Rel-18 but re-considering it in Rel-19. For the SL-U objective, the work should focus on FR1 unlicensed bands (n46 and n96/n102).

The scope was changed for as follows: For CHO including MCG and SCG a solution to avoid unnecessary signalling exchange between source MN and target SN was added, and to study and specify how to reuse the IDLE/INACTIVE mode measurement results which are to be reported during and/or after RRC connection setup/resume in order to improve SCell/SCG setup delay.

A separate bullet was added in the objective to specify support of Rel-17 MUSIM gaps.

The objective was changed to specify mechanisms to support multi-path scenarios.

The objective was changed to specify enhancements to NR PC5 and LTE PC5 to support UAV identification broadcast. Due to strong operator concern, operator licensed bands were explicitly excluded.

A normative phase for network verified UE location was approved.

The RAN4 recommendation to add band n79 as a target band for 8Rx was agreed.

The L3 measurement delay objective was removed from the scope.

All other deadlines/milestones to be defined, latest by June 2023 for SA/CT