A Beginner’s Guide to 5G Vertical Spectrum Issues in Europe 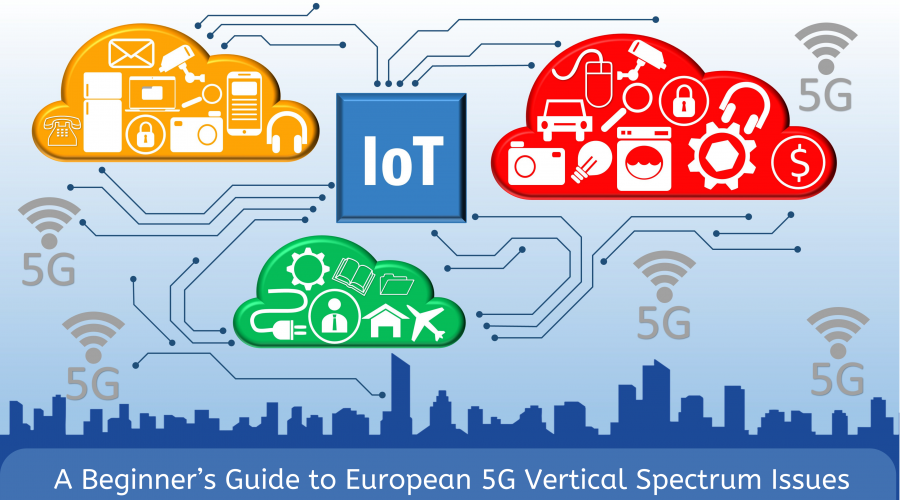 Anybody who runs a 5G application must necessarily have access to spectrum. The overall problem of managing 5G spectrum is complex enough, but vertical sectors have their own special set of issues to address. A window of opportunity opened up recently for Global5G.org to take a peek at what the various 5G vertical spectrum stakeholders think about these issues. As part of preparations for their “Third Opinion”, the Radio Spectrum Policy Group (RSPG) organised a Public Consultation at the end of 2018, whereby the stakeholders themselves were invited to speak their minds about what worries them the most with respect to the allocation and management of spectrum for verticals.

The responses ran to a total of more than 100 pages, whereby stakeholders ranging from vertical players to telecom providers to relevant industry associations were represented. As part of its contribution to the 5G PPP Spectrum Working Group, Global5G.org undertook an analysis of the responses and distilled them into a capsule summary that provides insight into the most pressing topics.

Reserving dedicated spectrum for verticals. Unlike “mere” smartphone 5G consumers, verticals often have very special requirements on what they need to be able to do with their 5G connections. So the first obvious question is: are verticals so special that they should have their own dedicated spectrum? It turns out that this is a point of contrast. Plenty of stakeholders can be found who argue in favour of dedicated spectrum. But there are also very strong arguments against such a practice. Spectrum is scarce and valuable. The nature of 5G is such that it can also be important to reserve broad, contiguous bands of spectrum in order to support applications well. But taking away pieces of spectrum to dedicate them to verticals runs a serious risk of fragmenting the available spectrum and making it much harder to carve out those broad, contiguous bands. Perhaps even worse, dedicating spectrum to verticals may result in severe underutilization of that precious 5G commodity. What if there are not enough verticals interested in using that dedicated spectrum? What if they only use it occasionally? Dedicated spectrum is just that: it is static; it cannot be reallocated dynamically to accommodate fluctuations in traffic.

Secondary licensing. If spectrum isn’t dedicated to verticals, then they will have to acquire it in another way. The obvious alternative is to acquire it from the mobile network operators (MNOs) who have acquired their spectrum through the official auctioning procedures (and sometimes at a very high cost).
There is currently a big movement toward secondary licensing as a way of resolving the tension between the need for dedicated spectrum for verticals and the danger of fragmentation and underutilization. Once MNOs have acquired spectrum, they turn around and license part of it to verticals. It is a way of ensuring that spectrum is really used by the verticals who need it, and given back to the owners when it is no longer needed.
However, mobile network operators are wary of being forced by governments to provide secondary licensing to verticals of their hard-earned and costly spectrum. They insist that if they are forced to do secondary licensing by government regulations, then there should be appropriate financial measures to ensure than they are not unduly penalized.

Self-licensing and management. Secondary licensing means that a vertical depends on an MNO for its spectrum. But sometimes a vertical’s requirements are so special that no MNO is willing to provide for it. The business case is simply too unattractive. A classic example is utilities. Heavy government regulation often prescribes that a utility must provide for five days of backup; which mobile network operators would be willing to do that? Not many. So, utilities often feel they have no choice but to “do it themselves” – acquire and manage spectrum on their own, in a self-licensing fashion.
But once again, the mobile network operators are wary: if a vertical (such as a utility) wants to acquire spectrum on its own, then the MNOs argue that it should be through the same competitive procedures that they themselves must participate in, to avoid unfair competition.

Private networking. Once they have acquired spectrum, whether dedicated, auctioned, or licensed from an MNO, then verticals may have another choice: use a public 5G network infrastructure, run by a mobile network operator; or run their own private 5G network.
This is another case where one might expect the mobile network operators to protest unfair competition: after all, public infrastructure and associated services are expensive to build and operate. But in fact, there is widespread understanding that there really will be cases in which private networking by the vertical is the only reasonable solution – for example, the utilities case described above. And furthermore, it won’t be in competition with traditional mobile network operators, because (as also explained above) there may be no attractive business case anyway for the MNOs. In summary, nobody is against private networking as such. All believe that it can be useful in the appropriate circumstances. Any contrast arises in the manner in which spectrum is managed for private networking.

Unlicensed spectrum. If dedication, auctioning, and secondary licensing of spectrum all have their disadvantages, what about yet another, seemingly simpler alternative: unlicensed spectrum? In fact, some do indeed believe that the judicious use of unlicensed spectrum is a winning strategy, especially for private networking, and promote that alternative enthusiastically.
But even this strategy has some potential deal-stoppers: many verticals have so-called “mission critical applications”, which place special requirements on reliability, latency, and availability. Such mission critical verticals are wary of unlicensed spectrum, which they suspect could turn into a kind of Wild West of interference from nearby and competing applications. The actual circumstances could change that (e.g. a manufacturing plant that is far away from any other source of interference), but there is a general wariness that unlicensed spectrum might be unable to handle the most stringent requirements.

Harmonized pan-European spectrum. Finally, there was another concern highlighted by a special class of verticals: those who work across borders and jurisdictions. A manufacturing plant sitting in an industrial park in a particular city will be fully served by its national regulations – in fact, it might be well served even by local regulations. But a satellite service provider or a pan-European autonomous vehicle service provider will need the collaboration of many jurisdictions. These verticals are concerned about making harmonised pan-European spectrum available so that they can get their job done smoothly.

This concludes our brief overview of the major issues surrounding vertical access to spectrum. The RSPG took these responses into consideration in preparing the final version of its Third Opinion a few months later. There are many more nuances and details than those presented here, of course, and there is still much work to carry out by the various responsible organisations in the months and years to come.